On a recent Sunday in October, 2012 we were involved in an accident on I-40 east of Wallace, NC, where our Ford F250 truck experienced a driver's side tire blowout going 62 mph. We veered into the left lane then down into the median where we made a slow speed impact with the median divider cables. Damage to the wheel well along with side bed damages caused by impacting the pylons that secured the cables occured. The RV remained intact and did not make contact with any obstacles.

The North Carolina Highway Patrol responded and filed an accident report. In the interim, we were working with our Roadside Assistance Program to secure a tow. They could not send a tow due to the accident involvment, but could research options. After about 1 hour, they indicated Oliver's Body Shop out of Mount Olive, NC could handle our situation. They estimated a 4 hour labor/travel rate at 125.00 per hour, or total estimate of $500, to tow our truck and RV to a repair facility of our choice.

While Mount Olive was just slightly further, we felt better finding a better solution that would take us closer to Wilmington, a much larger city with more repair resources. I reapproached the Trooper who initially had no solutions and he suggested Phillips Towing, a larger establishment with several locations in NC. He then handed me a Phillips Towing business card who I made contact with and explained our circumstances to, providing them with the same information Oliver's Body Shop was given. My contact person stated he would send out the needed equipment and estimated a response time of about an hour, including a supervisor who would be assisting. Price was not discussed, since I felt we were being towed about equal distance, I reasoned we would be in the same estimate range.

In about an hour, a medium sized truck arrived, and I quickly surmised it was more than enough to handle our situation. Much to my surprise, 15 minutes later, a truck large enough to handle the largest haz-mat spill of any tanker imaginable also pulled upon scene.

Other notes:
The below sequence of pictures provides a  better view of what we experienced as well as the situation faced by Phillips Towing.

Forward looking view confirming cables have been stretched and also showing RV is aligned directly behind truck as it is during routine towing and as it was when vehicles left roadway.

Rear positioned view demonstrating cables are aligned and not impacted and merely resting on the RV wheels with no entanglement.

In contacting Phillips Towing, they were informed the only consequence other than a routine winch-out & tow would be lifting a cable around my running board (see photo near my left knee).

Phillips Towing made a decision, even knowing my circumstances, to dispatch two rigs, one including their heaviest of duty, haz-mat, large rig, even though my situation was clearly explained as is indicated by their comments in the itemized bill.

The XP 850 never even crossed onto our side of the highway as is shown in this photo. It's only role, as can be seen in this photo laying on the grass, was to extend a cable/pully system to lift the cable off of the running board, something that could of easily been handled by the smaller truck. 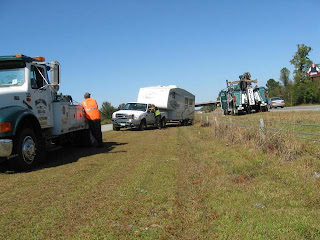 Large rig remains on westbound side of traffic as medium duty tow winches us away from the median and aligned with the tow truck.

The carrying rack is installed under the front axle, wheels secured and drive-shaft removed in preparation for tow to facility.

This final photo, as we are now ready for departure as debris field has been cleaned up, demonstrates again the lack of involvement of the large tow truck.

Tow bill showing $3,900 total due, of which one-half is billed for the Ford F250 tow, again, where the heavy duty equipment and emergency responder services were essentially nil, as demonstrated in the photos.

This is the itemized statement for the RV tow bill. I concede the storage, although it was extended to the disputing of the tow charges. However, as is demonstrated in the photos, the RV was not impacted by the accident and required no additional towing services, other than following behind the tow truck and the damaged truck back to Wilmington, NC. The tow-only piece of this itemized statement from accident to tow lot for the RV was $1,800--again, where no services other than allowing it to remain attached to the damaged Ford pickup, were received.